With the human brain able to process visual content 60,000 times faster than text, it’s a no brainer that visual content can be more effective than words. For that reason, about 90 percent of the information sent to our brain is visual. 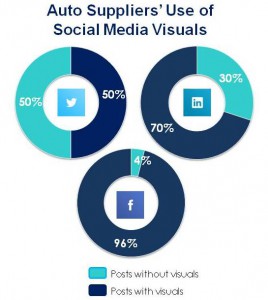 And almost every major social network, including Facebook, Twitter and LinkedIn, have recognized the increased prominence and importance of visuals and have strived to make posting visuals easier. And adding a visual element to your post pays off, check out these statistics:

Yet, our study of the top 25 North American automotive OEM suppliers showed that one-half of supplier tweets and three of 10 supplier LinkedIn posts are still missing visuals.

If your company is at – or below – average, you have a huge opportunity to improve engagement and reach by simply including visuals in your tweets and posts. One study suggested that content with relevant images gets 94 percent more views than content without a visual. So, once you’ve done the hard work of developing the post, simply add a visual and watch your message spread.

Boost your engagement by aiming to add a visual element – a picture, infographic, video, drawing, etc. – to all of your company’s social media posts. It’s proven to pay off!

7 Essential Tips To Be A Great Podcast Guest Meet the Media: Madeleine Winer, Managing Editor at Tire Review The Pulse of Automotive Media During the COVID-19 Restart After the Re-start: How to Communicate About Your Next COVID Crisis Restart Do’s & Don’ts for Leaders