What’s the top story you’re working on right now?
As an editorial staff, we are near the end of evaluating 47 vehicles for the 2016 Wards 10 Best Interiors competition. It’s not just a matter of, ‘Oh I like these seats’ or ‘these cupholders are awful.’ We figuratively tear apart all the vehicles, scoring them on fit-and-finish, ergonomics, comfort, materials, value, driver information, safety and aesthetics. We will announce the winners on April 14 and give out trophies at a ceremony during the WardsAuto Interiors Conference May 11 (for info, visit: http://automotive.penton.com/interiors) at Cobo Center. Along the way, there will be lots of winner profiles, videos, photo galleries and sidebars.

Tell us about your dream assignment.
To live in Germany for a few years, covering the European auto industry. My gearhead nephews think I already have a dream job traveling the U.S. and overseas, evaluating technology and product.

Describe the craziest or most fun story you’ve written.
Best mixture of work and play was a few years ago, when I was in Germany for a Bosch event, then had to return the following week for a VW/Bentley program that would include stops in Germany and the U.K. We turned it into one trip, which gave me a weekend in London, where I saw the Queen during a parade from Buckingham Palace, and then in Liverpool, where I immersed myself in Fab Four lore and got to play a few Beatles songs on stage at the Cavern Club. Then it was on to the Bentley plant in Crewe for a fascinating tour, followed by a trip to Berlin. Air Force One was on the tarmac as we arrived! We then hauled ass down the autobahn in VW diesels. Several stories along the way.

What is your top pet peeve with PR people?
Being asked, ‘What’s the top story you’re working on right now?’ Ask that question of an automaker engineer, and the answer likely will be, ‘You know I can’t talk about future product.’ As journalists, we all feel the need to hold stuff behind the veil, until it’s ready for publishing. 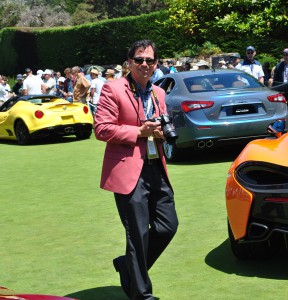 What is the top trend you’re covering or interested in right now?
Trends in automotive interior development have been top of mind, as I have spent Feb and March photographing in great detail all 47 entries for Wards 10 Best Interiors. Averaging 100 frames per vehicles, that’s close to 5,000 images. Why so many? Because the WardsAuto editors refer to them while scoring. It forces me to pay particularly close attention to craftsman, color selection, etc. We are working on another event focused on “user experience,” which incorporates every way a driver interacts with a vehicle, including the human-machine interface, head-up displays, navigation, connectivity and driver-assistance technology, which serves as a launchpad for automated driving. The WardsAuto User Experience Conference is set for Oct. 4 in Novi, where we will also give out awards for Wards 10 Best User Experiences.

Tell us a little about yourself (family, interests, favorites, background, etc.)
I carry a guitar pick every day, tend a fish pond in my backyard, am plowing through a series of rockstar autobiographies, stay up late for Red Wing playoff games and enjoy grilling and puttering around the house. I’m the youngest of eight kids and graduated from Wayne State in 1987 with degrees in journalism and political science. I spent 13 years as a daily newspaper reporter before coming to Ward’s in 1997. We formed the Exhaust Tones, a rock band of auto writers and PR people, in 2000. My wife Doreen and I have two grown sons, and we love traveling and bike riding.

Finish this sentence: People would be surprised to know that I:
… love Abba and have been known to repurpose perfectly good merchandise from curbside. I rode a unicycle as a kid. My Mom also thought I would be a good candidate to be Pope someday. I’ve disappointed her.