Despite making solid progress in the use of social media, many of North America’s top automotive OEM suppliers are still making critical mistakes that hinder the effectiveness of their efforts, based on our second annual SMaASH 2.0™study.

“Social Media and Automotive Supplier Habits 2.0™” analyzed social media usage by the top 25 North American automotive OEM suppliers (as ranked by Automotive News) during the first six months of 2015. Following our initial 2014 study of auto supplier social media use, the new study also focused on the four most popular platforms for this sector: Facebook, Twitter, LinkedIn and YouTube. 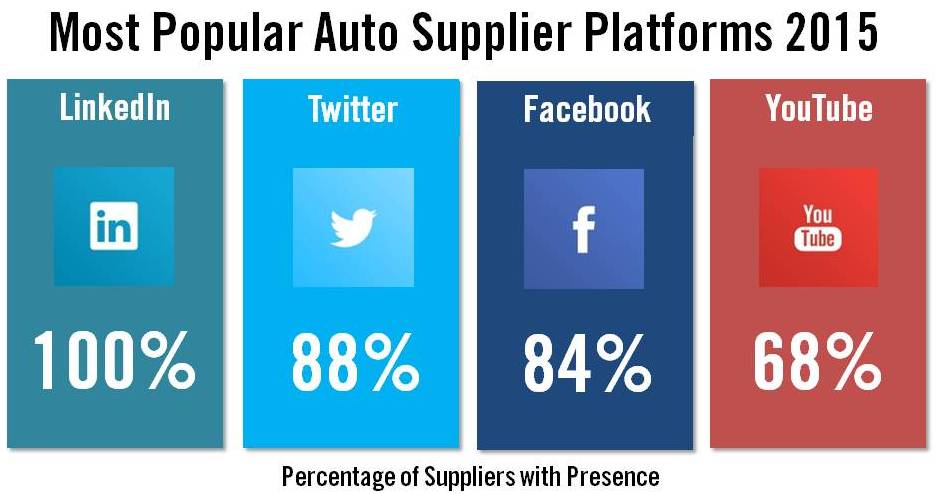 Our SMaASH 2.0 study results indicate that the top North American auto suppliers have made significant progress with social media in the past year, increasing their posting activity by 144 percent and more than tripling their following. Yet, in spite of their gains, top auto suppliers have some great opportunities to improve in fully leveraging these social media tools.

• LinkedIn is the only social media platform where all of the top 25 auto suppliers have a presence and it’s typically where they have the largest following (an average of more than 110,000 followers)

• Facebook is the platform where the average supplier’s following grew the most in the past year, with a 1177 percent increase over 2014 (LinkedIn followers grew 268 percent, Twitter followers grew 151 percent and YouTube subscribers grew 115 percent since 2014)

• Twitter remained the auto suppliers’ top channel in terms of the volume of posts, with 45 percent share of all posts, down from 48 percent last year, with LinkedIn making the biggest gain in volume with a 23 percent share, up from 19 percent in 2014.

• 68 percent of posts on Facebook, Twitter and LinkedIn by auto suppliers featured visuals, up from 57 percent in 2014.

Our SMaASH 2.0 study indicated that the top five social media mistakes for automotive OEM suppliers are:

1. Auto suppliers are still not sharing enough earned media coverage. Although coverage in trusted media outlets is viewed as the most credible of all content, only 4.3 percent of supplier posts shared such coverage, down from 6.5 percent in 2014.

2. Too many supplier posts are self-promotional. While the share of suppliers’ posts that are not promoting the company grew from 36 percent in 2014 to 47 percent in 2015, suppliers still have a way to go to reach the 75 percent non-promotional goal set by most social media experts.

4. Suppliers are not using LinkedIn enough. Among the four platforms reviewed, LinkedIn typically gives suppliers their largest audience (average 110,000+), yet the top suppliers average only 16 LinkedIn updates per month to leverage that following. They Tweet about 50 percent more than they post on LinkedIn, yet their Twitter following is only 7 percent as large as their LinkedIn following, on average.

5. Many auto suppliers seem to be missing a planned approach to social media. A planning calendar can help suppliers to post with a more consistent rhythm – which helps to sustain and build a following. And it can also provide suppliers the necessary time to customize each post to fit each platform. Some suppliers, to save time and effort, use Hootsuite or other applications to post the exact same Tweet across all their other platforms, rather than customizing the post for the unique characteristics, environments and audiences offered on Facebook and LinkedIn.

• Increased its following by 363 percent in the past year to some 178,000 followers across all four platforms;

• Doubled the number of videos it shared on Facebook, Twitter and LinkedIn in 2015 over the previous year.

Our industry-sector-specific data in the SMaASH 2.0 study provides auto suppliers with a resource to benchmark their social media efforts and lay out a strategy to enhance engagement and effectiveness. In most cases, it will not require a major overhaul, just some closer analysis of their audience and goals, some course corrections and some proactive planning.

For more information on the study, email us at bianchipr@bianchipr.com.