Despite the best of preparation by the PR professional, sometimes offenses by a CEO during a media interview can have a negative impact on the resulting media coverage – causing damage to the CEO’s and the company’s images, and perhaps even undermining the company’s prospects for future positive coverage.

Worse yet is the fact that often these offenses are unintentional … and avoidable. 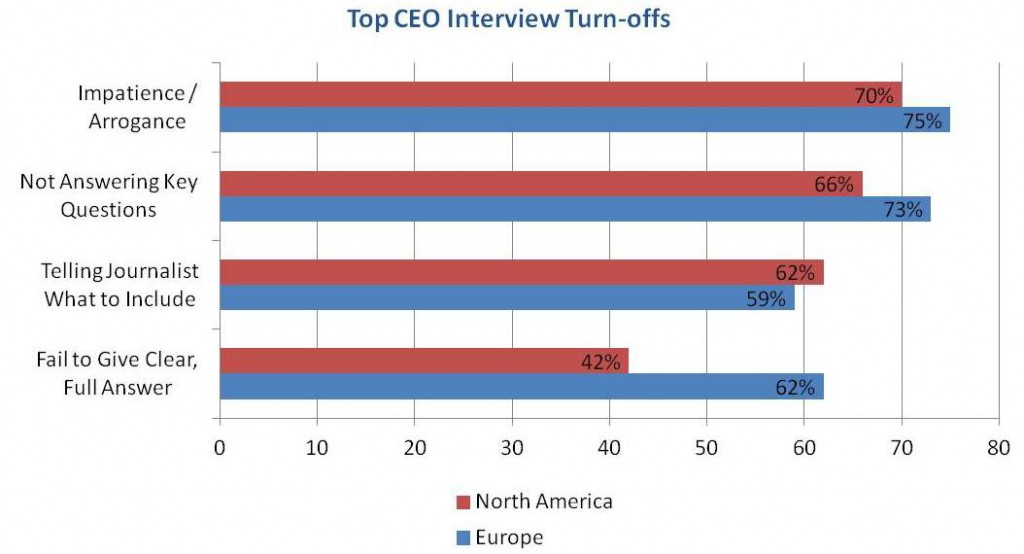 According to a study recently conducted by our partners in the Public Relations Global Network (PRGN) from across North America and Europe, these top offenses overall are:

There is some geographic variation, according to the PRGN study. For example:

But across Europe, journalists’ views can vary significantly by country. For example:

• In France, the worst CEO offense (88 percent) is (#5) not delivering on your promise during, and following, the interview;
• In Spain, (#6) interrupting the journalist or allowing something to interrupt the interview can severely damage the coverage;
• In Poland, telling the reporter what to include and exclude from the article is just as harmful as impatience/arrogance and not answering key questions; and
• In Finland, Hungary, Ireland and Italy, not answering a material question is the biggest reporter turn-off.

Knowing which CEO behaviors are most likely to favorably impress a journalist – and what specific behaviors should be avoided with reporters from different countries – you can boost your CEO’s chances for positive press.

One way to obtain that info is to access a PR expert who has that kind of local media, market and cultural knowledge — like we have through PRGN offices in 50 key markets around the globe that are run by local PR experts.