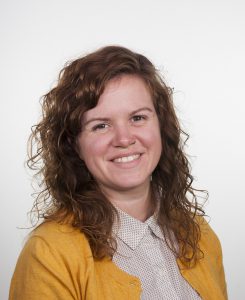 Nora Naughton is the General Motors Co. beat reporter on The Detroit News autos team. She also covers a variety of mobility topics.

Can you tell us what types of stories, trends or issues are on your radar now?
This is an incredible time to be on the automotive beat. The industry is reckoning with some serious upheaval as technology gets more sophisticated, and no one really seems to know what automobile transportation will look like in the next couple of years, let alone the next decade.

But upheaval isn’t what it used to be in Detroit. The auto industry is very healthy right now, even as sales decline slightly from the record-breaking years. And consumer demand for high-profit SUVs and pickup trucks makes the money automakers need to develop the technology for the car of tomorrow. All of this technology that came out of start-up culture in Silicon Valley that was supposed to kill the Detroit automotive industry is actually bringing it back to life in some ways. It’s not a dinosaur industry anymore.

Describe the craziest or most fun story you have written.
This probably doesn’t count as a story, but my first-ever reporting trip was to Las Vegas to cover CES about two months after I started at The News. It’s a wall-to-wall coverage type of assignment, and working against the time difference meant I was keeping pretty odd hours. But I’ve never had more fun at work. It was incredible to see some of the futuristic technology automakers and suppliers came to the show with, and an interesting juxtaposition to the North American International Auto Show just a week later.

What story or stories are you most proud of?
I’m proud of almost everything I’ve done at The Detroit News, mostly because I have a great team behind me. But I’m also really proud of a series I wrote about the prevalence of homelessness in the wealthy Fairfield County community of Stamford, Conn. when I was covering development there. It spurred some local action and even won an award from the Connecticut SPJ.

What elements or characteristics do you look for in a story?
On any business beat, I think it’s important to find stories that the average reader actually wants to read as often as possible. That’s a little easier on autos because, come on, cool cars. But I also think that every aspect of the American automotive industry touches so many lives, especially in the Detroit area, so I’m always looking for that intersection between business and real people.

How long have you been in journalism and how did you get started?
I have to go really far back to remember a time when I wasn’t working toward a career in journalism. It’s sort of something I’ve always wanted to do. I’ve been making money as a reporter since college, when I worked for my university’s student newspaper, The Eastern Echo (Go, Eagles!). My first job on the automotive beat was in 2012 when I did an internship at AutoBeat, an online automotive digest. That’s when I first realized I might want to be an autos reporter, only reinforced by a couple summer internships at Automotive News. I took a break from the beat to cover real estate development in Stamford, Conn. for Hearst Connecticut Media, but I couldn’t stay away. I’ve been at The Detroit News and back on the autos beat since October.

Finish this sentence: If I am not reporting, I am …
Consuming as much pop culture as possible. Music, TV, movies, books – I love it all and I have opinions.

What advice do you have for PR people that want to pitch you?
Don’t cold-call me with a pitch, please. Email is the best place to start.

Any pet peeves with PR people?
Calling my desk phone and then immediately calling my cell phone if I don’t pick up. Leave me a voicemail. I promise I check them and I will call you back.

Tell us a little about yourself (family, interests, hobbies, background, etc.)
I come from a family of reporters – yes, he’s my dad – so I’ve always appreciated reading good writing. I’m always in the middle of a good book. I just got married in October, and my wife and I live in Plymouth with our two cats (Sterling and Donaghy) and our new puppy (Leslie). We like to get outside when we can with lots of camping, kayaking and hiking. I’m also lucky enough to have married a Yooper with a family camp on Lake Superior, which makes for the best summer getaways.