Can you tell us what types of stories, trends or issues are on your radar now?
Tesla and Elon Musk, an unending story. Ford’s turnaround and possible alliance with Volkswagen. Developments in autonomous driving, safety, new car technologies.

Describe the craziest or most fun story you have written.
Three really fun stories:
Tesla’s Lots (and Lots) of Cars

Driving With No Hands

What stories are you most proud of?

What elements do you look for in a story?
What makes a good story: not just something new, but something truly unusual and unexpected. Often you can explain the stories in just one or two words. Example: “speaker-less car.” You say that and people go, “What?” When I hear that, I know I’ve got a story.

How long have you been in journalism and what got you started?
I’ve been a reporter for 31 years. I graduated from Boston University with BS in PR (seriously), then worked in agencies in New York. I’ve been on your side of the fence! After three years, I decided I wanted to be reporter, and I took a job (and a 50% pay cut) at the Haverhill (Mass.) Gazette.

What advice do you have for PR people?
Advice: Before emailing, know what I cover. It will save time. The Times is a general interest newspaper, so I don’t get into the nitty-gritty of the industry. I don’t cover the Dream Cruise or dealer software or aftermarket products. Email is best. Try to describe the story idea in 3-4 sentences. If it takes 3-4 paragraphs to explain it, there’s almost certainty no story the Times would cover.

Pet peeves with PR people?
Biggest pet peeve is press releases or pitches blasted out to me and 5,000 other people. If you’re selling a story to everyone, it’s not a story I want.

If I am not reporting…
…. playing hockey, watching hockey, coaching hockey. My whole family is into hockey. At Thanksgiving, we rent a sheet of ice and have 20-25 of us out there, old folks and little ones skating at one end, a friendly cross-ice game at the other.

Tell us a little about yourself
I grew up in New Jersey, went to BU, worked three years in PR, and then became a reporter. In the ‘90s, I went to grad school, got a degree in international relations, then landed a job with Reuters in Germany. After three years I was hired by the Wall Street Journal and worked out of the Frankfurt bureau. I started covering cars over there, transferred to the Detroit bureau, and became bureau chief in late 2007, just in time to manage coverage of the bankruptcies. I got a buyout from the Journal in 2014 when they were cutting staff, and signed on to the New York Times in 2016. I love writing for the Times. I live in Ann Arbor and have two hockey-playing daughters. 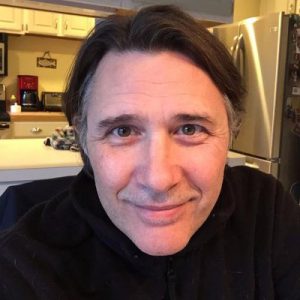 Check out some of Neal’s latest work here:

Ford, an Automaker at a Crossroads, Seeks Cuts and Partners

Volkswagen, With a New U.S. Leader, Aims for Revival

Trump Hails Revised NAFTA Trade Deal, and Sets Up a Showdown With China