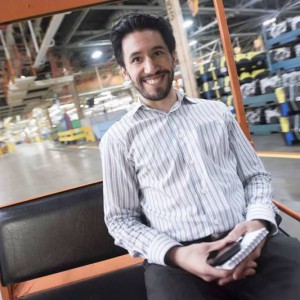 What’s the top story you’re working on right now?
It’s a relatively slow period in the industry right now: The UAW contract negotiations wrapped up late last year, and auto show season has come and gone. But I’m working on a number of stories, from autonomous car features, to reports on what’s happening at Ford Motor Co. I can’t get too specific in case someone from that other Detroit daily paper reads this. :) I’m also constantly working on our weekly Detroit News autos podcast, Miked Up. My colleague Mike Wayland and I post a new episode each week detailing the oddities and anecdotes of the automotive industry. You can view all our past episodes at soundcloud.com/miked-up-detroit-news.

Tell us about your dream assignment?
My dream assignment would to travel to France later this summer to cover the Ford GT’s return to racing at the 24 Hours of Le Mans. Because of a limited travel budget, that’s not going to happen. More broadly, my dream assignment would involve traveling to new parts of the country to cover the auto industry. Early in my career I’ve been able to do that with bylines from Las Vegas, San Francisco and Daytona. And I’ve been able to cover the President twice. I absolutely love what I do and love this industry. It can be challenging and frustrating, especially considering the state of the newspaper business, but it sure does beat real work.

Describe the craziest or most fun story you’ve written?
My favorite story pre-dates my autos coverage. In my first full year at The News I spent two days at Santa Claus School in Midland, Michigan. It was the most magical experience I’ve ever had. Hundreds of old, fat white men with flowing beards and rosy cheeks learning how to properly ho-ho-ho, how to build simple wooden toys and how to understand basic sign language so deaf children could tell them what they wanted for Christmas. I spent time with dozens of the Santas from across the country and, while they all had unique stories, they were all similar in their love of children and desire to keep Christmas innocent and wonderful. Most loathed the Mall Santa duty because they only got to spend a minute or so with each child. The favorite assignments (and ones that made them the most money) were the individual parties or appearances at homes. It made me want to grow out my beard and don a red suit when I retire from newspapering.

What is your top pet peeve with PR people?
When they’re not immediately available after sending out a press release. I understand if you’re taking calls from other media, but I can’t tell you how many times I’ve received some breaking news and am not able to reach the PR person listed on the release until hours later after leaving a voicemail or email with questions. It seems like a simple thing, and I know it can be difficult if we don’t have a prior relationship, but I feel I’ve had to deal with slow-responding PR people too often. At the very least, a quick note saying you’re checking and expect a response soon would be appreciated.

What is the top trend you’re covering or interested in right now?
Autonomous and connected car technology. It’s fascinating having a front row seat to see an industry change so drastically. Whether its learning about lasers, sensors and cameras that allow the car to drive for you, or the apps and software that can connect your phone, home and vehicle together to coordinate schedules, contacts, favorite destinations, etc., it’s thrilling to think about what the average driving experience will be like 5 or 10 years from now. Whether it’s the technology, legislation, customer acceptance, infrastructure, ethics or other factors surrounding driverless cars, there’s plenty to write about.

Tell us a little about yourself.
I’m an only child and was born in Metro Detroit but moved to Ottawa Lake, Michigan, when I was two. I went to St. Francis de Sales High School in Toledo, Ohio, before moving back to Detroit for college at the University of Detroit Mercy. I covered sports at UDM and interned one summer with MLB.com in New York City. I’ve lived in downtown Detroit since 2013, first in Lafayette Park and, for the past year and a half, in a high-rise on the Detroit River near Joe Louis Arena. It’s funny that I cover automotive, because most days I don’t drive. I take the Detroit People Mover to and from work, and in the spring and summer I bike everywhere I need to go. I love playing and watching basketball, and my ideal vacation would be camping and fishing Up North. Captain America is my favorite superhero, Game of Thrones is my favorite current TV show, and I can probably beat you in NBA 2K on Playstation.

People would be surprised to know that I…
Had major back surgery before my freshman year of college because of scoliosis. My spine was curved in two placed and looked like the letter “S.” I literally grew three inches overnight when they straightened my spine during surgery, and now you can never say I have bad posture, because it’s physically impossible for me to slouch.