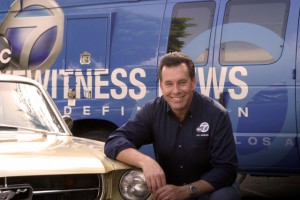 What’s the top story you’re working on right now?
Well, as usual I’m juggling lots of things. Just spent a day in the hills of Malibu at Motor Press Guild’s annual “Droptops & Dirt” off-road and convertible event. Got lots of great footage for both a Jeep 75th anniversary story and one on the upcoming Honda Ridgeline pickup. And tomorrow, I’ll be at a Tesla store checking out the scaled-down Model S for kids. Yes, that’s kind of my usual week!

Tell us about your dream assignment.
Okay, dream for sure, and not likely to happen, but here goes. Would love to spend a summer traveling the country for a series of stories on American classic car life for Good Morning America, hop-scotching to events from coast to coast. Kind of “Charles Kuralt” meets “Top Gear,” if you will. The series would wrap up at Pebble Beach in late August.

Describe the craziest or most fun story you’ve written.
Wow, so many, but one recent one comes to mind. About a year ago I did a piece with Edmunds.com on the 1989 Yugo they’d added to their long-term test fleet. (They went all the way to Idaho to find a clean one and paid like $1200 for it.) I met them in Beverly Hills and we tooled around town, including Rodeo Drive, during a busy Friday lunchtime. It was a lot of fun, we got a lot of looks, and the car actually wasn’t as awful as I thought it’d be.

What is your top pet peeve with PR people?
Getting pitched from people who obviously have never even bothered to so much as look on our web site to see what I actually do. And it’s even more comical when they pitch stuff that I would NEVER cover. “How about an in-studio demonstration of the hottest new kitchen gadgets for National Cook At Home Month?” Also, if I shoot something that will air at a later time (most of my stories), repeatedly asking when it will air doesn’t go over so well with me. Become too much of a pest, and not only will I not give you a heads-up as to when it’s going to air, I might not air your story at all. (Sort of kidding on that last part.)

What is the top trend you’re covering or interested in right now?
Since I’m based in Southern California, anything involving fuel efficiency is always a hot topic, even when gas prices are down. Electric cars (some of which are only sold in California), hybrids, hydrogen fuel cells, etc. And obviously, technology like driver assistance, active safety, and of course autonomous cars are popular subjects these days.

Tell us a little about yourself (family, interests, favorites, background, etc.)
Well, I’m pretty much a car geek 52 weeks a year. I emcee a lot of concours d’elegance events on weekends, which I really love doing. I also spend probably more time than I should playing with cars in my garage. My wife and I don’t throw a Super Bowl party or Oscar viewing party, but we have an annual motorsports brunch at our house on the day of the Indy 500 and Monaco GP. Thankfully I have a very patient wife, who I’ve managed to turn into a bit of a gearhead.

Finish this sentence: People would be surprised to know that I…
Never dreamed I’d be doing this! I was actually a business major in college, and just sort of stumbled into broadcasting as a part-time job while in school. Go figure.