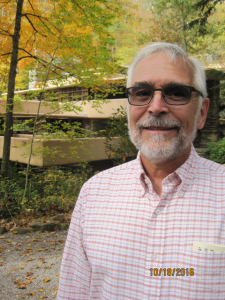 Meet the Media: Terry Costlow is a senior writer at Costlow Enterprises, where he contributes to a variety of industry journals, such as SAE’s Automotive Engineering International, Electronic Engineering Times and Interface Age Magazine. He’s been writing about electronics and technology since the 1970s, when the Apple 1 was introduced and the Osborne portable computer weighed 24 pounds.

1. Without revealing any secrets, can you tell us what types of stories, trends or issues are on your radar now? Anything related to autonomous vehicles is a hot story now, though it’s becoming somewhat difficult to bring anything new given all the coverage. I cover electronics so there’s always something new coming up.

2. Tell us about your dream assignment. Ever since watching coverage of JFK’s assassination, I’ve always thought journalism was a cool job because you get to talk to the men/women other people would like to talk to, then tell those other people what they said. That’s more or less what I get to do now. But it’s always a dream to do those interviews in, say, Hawaii, Paris, Tokyo or someplace I wouldn’t otherwise get to.

3. Describe the craziest or most fun story you’ve written. It’s really wild to think back and see how much technology has changed. I did an article on the first 3.5-inch disk drive – Control Data said they could do 6 Mbytes in that “tiny” drive, but didn’t think anyone would buy it. Later, in the 80s, disk drive guys were talking about large farms of disk drives, now called data centers. They had nice drawings of disks and the various interfaces to link them together, then showed them sending data off to some computer that the disk drive people didn’t really care much about. So they just drew a cloud.

4. What is your top pet peeve with PR people? The people I deal with regularly are great, but many others are pretty amusing. I get a monthly request from one who asks what articles I’m working on. I have no idea who it is, who the clients are. Nothing. Another are the e-mails from unknowns written to seem like we’re buddies.

5. Tell us a little about yourself (family, interests, favorites, background, etc.) I’m just starting to enjoy grandparenting, with 2-1/2-year-old and 2-month old grandsons, with a third on the way. I studied journalism in Southern Calif., doing quite a bit in the entertainment industry. But after a few meetings with stars, I basically decided they were mostly self-centered kids, so I was happy when I heard about a magazine opening at an early PC magazine, Interface Age. I had to grab a dictionary to see what interface meant.

6. Finish this sentence: People would be surprised to know that I: earned a black belt in karate a few years ago. I enjoy the combination of mental and physical skills involved with karate.