Without revealing any secrets, can you tell us what types of stories, trends or issues are on your radar now?
The talent wars between automotive and Silicon Valley; the role technology companies will play in the OEM space; OEMs trying to reinvent themselves as ‘mobility companies’ and how that’s working out for them.

Tell us about your dream assignment.
To ride cross-country in a Google car, taking all the back roads and barely passing cyclists along the way, stopping at diners and interviewing people I meet, yelling out the window, “hey, look over here, nobody’s driving this car!”

Also, like everyone, I would love an insiders’ tour of the Apple Car Project. And spending some time in China interviewing OEM executives, workers and analysts and touring automotive operations there.

Describe the craziest or most fun story you’ve written.
When I worked in newspapers, I covered real estate development in the neighborhoods around downtown Chicago—that got pretty crazy when the neighbors in the South Loop didn’t want a skyscraper going up in their backyards. I once covered a neighborhood spat on a pretty run-down and forgotten section of Cleveland where one family had, over the years, bought up half the houses on the street, and the councilwoman agreed to name the street after them. The neighbors who weren’t part of that family were all riled up. They were all have-nots, their property values in the low five figures, but there was still a hierarchy of elitist snobs vs. ne’er do wells/hicks. 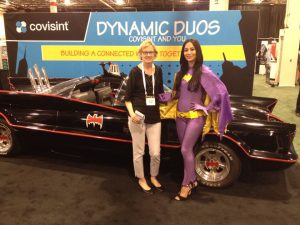 What is your top pet peeve with PR people?
I don’t let PR people bother me all that much. But there are a few excellent ones out there who understand journalism and are actually quite helpful and I do tell them when I think they’re doing a bang-up job.

Tell us a little about yourself (family, interests, favorites, background, etc.)
I come from a family of gearheads, so I get the fascination with powerful machines, but I’ve been covering automotive only for a year and a half, so any source who’s willing to give me backstory or explain technical issues in detail is a godsend. I covered healthcare for eight years before that, and my experience writing about workforce issues in that space helped me land the job at IndustryWeek. I have a nine-year-old daughter and a dog and I like to pretend I can cook and garden (but I’m better at gardening than cooking so—want any heirloom tomatoes?)

Finish this sentence: People would be surprised to know that I once wrote a story for Slate about the surprising scarcity of a white-hot new edition of a Little House on the Prairie book.