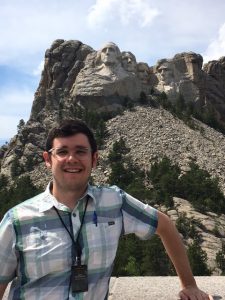 Jack Walsworth is the Subaru beat reporter at Automotive News and also helps out with the magazine’s automotive supplier coverage. Additionally, he has the role of web producer which means he builds photo galleries for the website and loads print stories online every week.

One thing that has been eye-opening to me is just how many suppliers are out there for us to write about. Thankfully, I have a supplier expert in my editor, Lindsay Chappell, to help guide me but I’m definitely trying to take in as much as I can about that side of the industry.

And with Subaru just unveiling its all-new three-row crossover, the Ascent, I know that I’ll be spending a lot of time with it!

It’s funny, in a way I consider every assignment I get to be a dream. From a young age I’ve been infatuated with cars so to cover auto shows, vehicle launches and to just write about this industry feels very much like a dream even though I know I’m just getting started.

But if I had to pick a dream assignment, I would love to cover the Chicago auto show. Now that might not sound like a lot, which is in no way is a knock on that show, but being from Chicagoland, it was a big deal when I was growing up to go to the show every year with my dad. I haven’t been to it since I was in high school, so it would be special for me to cover it as a part of the automotive press and file a story with a Chicago dateline.

When I was a sophomore at the University of Detroit Mercy, I wrote a feature on arguably our most famous alum at the moment, actor Keegan-Michael Key. The funny part was how I got ahold of him. At the time, he had a Facebook profile just like everyone else. Since he was in the same fraternity as I was, we had some mutual friends and so in what I thought would be a moonshot, I sent him a message over Facebook and he got back to me the next day, gave me his number and told me to call him. He was just so fun to speak with and I’ve always appreciated that he took the time for an interview with our college paper, The Varsity News. This was back in 2013 and ever since then, it seems like his star has gotten brighter and brighter so it was good timing!

Definitely when I get email pitches that start off with “I know this would topic would be great for Automotive News” when it’s clear that they’re not aware of what we do and don’t cover.

Like I mentioned earlier, I’m from Chicagoland, the western suburb of Geneva, to be precise. I love where I’m from and wouldn’t want to have grown up anywhere else. And plus, my dad always left the Chicago Tribune out on our kitchen table for me to read so I have that paper to thank for my interest in journalism. But both my parents are transplants out of Michigan so I spent a lot of time in this state and have family all over the mitten. When the time came for college, I knew I wanted to go to a smaller school and eventually stumbled across UDM. I quickly learned that not a lot of people leave Chicago for Detroit but I like it here a lot. I wouldn’t be doing what I’m doing now if I hadn’t made that jump.

I interned at the Cincinnati Enquirer after my sophomore year of college before finding my way to an internship with Automotive News. I was a part-time intern here between classes during my junior and senior years, interned at The Ann Arbor News for a summer in between and then interned full-time here after graduating in May of 2016. This past February, I became a full-time reporter and I’m not sure where the time has gone since! This also means that I have a long-winded answer when I meet people in the industry for the first time and they ask how long I’ve been with Automotive News.

I’m a big sports fan and thanks to my parents, I was raised to root for the University of Michigan and the Detroit-based teams (except the Lions, I’ll watch them but I’m indifferent on that team) despite being raised in an area that was more friendly towards da Bears and da Bulls.

And it goes without saying that I’ve always loved cars. To keep myself entertained when I was little, I would name off cars as they passed us by from the back seat and had a toy car collection that was second to none. (I actually have Matchbox cars still in their packages that hang in my cubicle at the office). I’ve had a Car and Driver subscription for as long as I’ve been able to read, it seems.

I enjoy reading in my spare time and can’t get enough of Erik Larson’s non-fiction or Elmore Leonard’s vast collection of crime novels.

Finish this sentence: People would be surprised to know that I…

Have been to only one concert in all my life and it was just last year when Kanye West was at Joe Louis Arena. It was also the last event I saw there during its farewell season so I’ll have a great story to tell when we’re all reminiscing about the Joe 20 years from now.