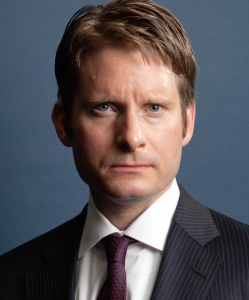 Without revealing any secrets, can you tell us what types of stories, trends or issues are on your radar now?
My primary role is covering Fiat Chrysler Automobiles and global auto parts suppliers, so anything and everything affecting these corporate actors is on my front burner. Journalists are drawn to the intersection of business and politics like bugs to a porch light, so Trump Administration trade policy looms large over my beat. Another hot topic is innovation in areas such as ADAS and EV technology which presents some interesting opportunities and risks for the automotive OEMS and suppliers alike.

Tell us about your dream assignment.
My dream assignment is pretty close to what I’m doing now, covering a key industry for the premier business news publication in the U.S. In the future (or in an alternate life) I could see myself running a full-fledged bureau, especially one in a city that no longer has much, if any, national business media presence. The financial realities of today’s media industry make that a difficult proposition and with new technology it’s easier than ever to cast a wide geographical net from regional hubs. But I enjoyed a nearly four-year long assignment in Calgary, Alberta and think the Rocky Mountain region in general is a rich vein for journalism. Also, any job on the masthead of Field & Stream looks pretty ideal to this veteran desk jockey.

Describe the craziest or most fun story you’ve written.
I visited the U.S. Marines’ jungle warfare center in Okinawa in 2000 and recounted the training undertaken by new recruits in a story for Dow Jones’ Far Eastern Economic Review magazine. That hands-on experience included rappelling off a cliff, firing a machine gun (armed with paint pellets) and skimming the trees in the belly of a CH-53 Super Stallion helicopter. Another crazy story came after hitching a car ride out of the “exclusion zone” around the Fukushima Dai-ichi nuclear plant in Japan less than 24 hours after it was damaged by a tsunami on March 11, 2011 and began leaking radioactive gases. (I was unharmed.) A recent favorite involved reporting on a midnight sun golf tournament in Dawson City, Yukon Territory, which enabled me to fulfill a lifelong quest by getting a nearly identical byline and dateline.

What is your top pet peeve with PR people?
I respect what PR professionals do and normally that’s mutual. But occasionally there’s someone who can’t–or won’t–take a polite “no” for an answer.

Tell us a little about yourself (family, interests, favorites, background, etc.)
Before arriving in Detroit in January with my wife and young children in tow, I worked for the Journal covering oil and gas in Calgary, Alberta for about four years. Prior to that, I reported from the Journal’s Tokyo bureau, primarily on Japanese automakers. I started my career at Bloomberg, then did stints at The Associated Press, Far Eastern Economic Review and (pre-Bloomberg) BusinessWeek, which I joined as a reporter in Tokyo but later served as an editor based in New York. I took a hiatus from journalism in the mid-oughts, first working for a hedge fund and then at a white shoe bank. Somewhere along the way, I wrote a book about Toyota’s luxury division called “Lexus: The Relentless Pursuit.” I am a history buff and enjoy the great outdoors. Fluent in Japanese, I also speak a few words of French and passable Canadian.

Finish this sentence: People would be surprised to know that I studied Mongolian in graduate school, passed the FINRA Series 7 exam, and selected the house wines served at the Harvard Club of New York.