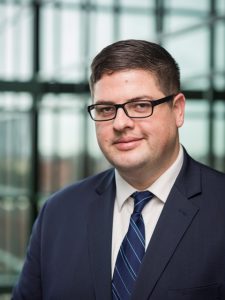 Chad Livengood is a journalist covering how Detroit is back on the rise after decades of economic, social and political decline at Crain’s Detroit Business. He previously covered Michigan politics and government with an emphasis on in-depth enterprise stories and breaking news from the state Capitol for The Detroit News.

What’s the top story you’re working on right now?
In my new job at Crain’s Detroit Business, I’m writing about Detroit back on the rise after six decades of decline. This assignment is focused on documenting what’s working and what’s not in Detroit. While there’s a beautiful city being rebuilt in downtown and Midtown, this is still a city that struggles with a high rate of unemployment, abject poverty, poor-performing public schools, adult illiteracy, broken infrastructure and highest-in-the-nation auto insurance. All of those issues are barriers to economic mobility for Detroiters and my job is tackle them. I’m currently focused on the high cost of auto insurance rates Detroiters are charged. It’s a major issue that, frankly, scares away people from moving to Detroit.

Tell us about your dream assignment.
I’ve always wanted to be the editor-in-chief of a newspaper. Maybe someday.

Describe the craziest or most fun story you’ve written.
In July 2015, two former aides to state Rep. Todd Courser and Rep. Cindy Gamrat came to me with secretly-taped audio recordings of Courser confessing to having an affair with Gamrat and plotting a bizarre cover-up. The aides were fired for refusing to participate in the cover-up and lie to the spouses of the two state representatives. Courser asked one of the aides to send a lewd email anonymously to fellow Republicans with a story about how Courser was caught having sex with a male prostitute behind a “prominent Lansing nightclub.” During a late night meeting, which the aide Ben Graham taped, Courser read the email aloud. He told Graham the email was designed to “inoculate the herd” and sewing doubt about rumors of the Courser and Gamrat affair by creating the appearance of a smear campaign against him. Graham refused to send the email (part of the reason he was eventually fired), but Courser got a friend to send it for him. The tape confirmed rumors of the affair and that he authored the salacious email. I wrote a big story about the tape and email on Aug. 7, 2015. The story set off an investigation by the Michigan House of Representatives and a feeding frenzy of stories. Courser came out with an outlandish claim that he and Gamrat were being blackmailed by anonymous text messages from someone threatening to expose their affair if they didn’t both resign. Courser claimed these text messages caused him to cook up the false flag salacious emails. This set off a media feeding frenzy. And then it got stranger. Other reporters hired private investigators to track down the history of this burner phone. Two names associated with the cell phone came up in these investigations: Todd Courser and a “C. Livingood.” I had absolutely nothing to do with the text messages. A state police investigation into this whole matter later found that the burner phone was purchased by a friend of Gamrat’s husband, who sent the threatening text messages in an effort to get his wife to stop sleeping with Courser. The Lapeer County prosecutor refused to charge Joe Gamrat with extortion as Courser demanded. Courser later ran for county prosecutor. About 35 days after my initial story was published, the House of Representatives voted to expel Gamrat from office for her role in using state employees to conceal the affair and they forced Courser to resign moments before an expulsion vote. Courser was investigated by the Attorney General’s office and is about to stand trial for perjury in his testimony to a House committee that investigated this whole brouhaha after my story was published.

What is your top pet peeve with PR people?
If I don’t know you, I’m not likely to pay attention to your emailed story pitch. Pick up the phone and call me. I don’t bite.

Tell us a little about yourself (family, interests, favorites, background, etc.)
I’m 34-years-old and I grew up in Chelsea. I have a journalism degree from Central Michigan University, where I met my wife, Amanda. We have one daughter, a bright and energetic four-year-old named Madison. My wife grew up in a Lake Huron town, so we spend as many weekends up on the beach as possible in the summertime. We’ve lived in Missouri and Delaware for newspaper jobs I took to advance my career. But we eventually made our way back to Michigan. I’m a big fan of this beautiful state – its people, recreational opportunities and even the weather.

Finish this sentence: People would be surprised to know that I:
Care about the community that I write about.