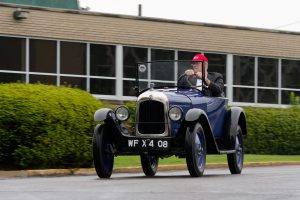 Lindsay Chappell is a news editor at Automotive News, responsible for coordinating the paper’s supplier coverage and Japan industry news, among other things.

Without revealing any secrets, can you tell us what types of stories, trends or issues are on your radar now?
I’ll gladly tell you because I welcome phone calls from people who want to talk about them! I have my hands in a few different topics lately. I coordinate our global supplier coverage, which is really the whole chain of automaking – supplier companies and what they’re dealing with and planning, the technologies they’re developing, the evolution of relationships between suppliers and OEMs and among the parts and tech companies themselves, and the peaceful and sometimes not-so-peaceful flow of supply chains through final assembly plants and out to car dealerships. Think 3,000 parts per vehicle times 200-300 different models, times different markets and different business factors and different personalities. That’s a pretty big landscape of stories to report. We have to pick and choose, but we do so with a zeal for the business.

I edit our Asia coverage that comes through Tokyo, and also a couple of other reporters and their beats. And for a significant part of my time, I continue to cover Nissan North America as a reporter. So I not only get to work as editor with great automotive reporters, like Hans Greimel and Richard Truett and Dave Sedgwick, but I also get one of our excellent editors, Dave Guilford, keeping me on my toes as a reporter.

Tell us about your dream assignment.
I’ve always been a factory rat. I’m totally fascinated by launches. And I’d put that in quotation marks – “launches” – to widen the definition. A new factory start-up, a new product launch, a production launch within an existing factory, a new market initiative, a new technology hitting consumers for the first time. There’s a common denominator in all that, which is people working around the clock and putting their hearts into a venture they’re excited about. The engineers who bring things to life are always cool to talk to. They don’t get much of the limelight when things go right, which is most of the time. But the whole giant enterprise of people innovating and problem-solving and doing things that haven’t been done before. When you get inside a launch and explore it as a reporter, you hear so many great stories of people at the top of their game, from CEOs with a vision to newly trained production line workers who love their jobs.

Describe the craziest or most fun story you’ve written.
Ed Garsten, who’s covered the Detroit auto scene for a long time, now works with us at Automotive News. Ed and I were reminiscing a couple of weeks ago about how we both covered for our respective papers the 2003 court case when the now-deceased Las Vegas billionaire investor Kirk Kerkorian sued what was then DaimlerChrysler, claiming that they hoodwinked him into supporting their merger – which turned out to be not exactly the advertised “merger of equals.” I wouldn’t use the word “fun,” but crazy maybe. It was the sort of case you’d want to settle quietly out of court. But that didn’t happen. And what followed was a weird public spectacle drawn out over the December 2003 holiday season in snowy Wilmington, Del., where the curtains were pulled back onto a lot of backroom wheeling and dealing of powerful executives who clearly wished they were not sitting there in the witness box. The one thing I got out of that wintery experience so far from home – and it wasn’t even the topic of the legal question – was an understanding of who Chrysler really was. I don’t mean the Chrysler of its products, or the Chrysler of its chief exec, or the Chrysler of its official corporate records – but the Chrysler of its people. You could hear between the lines of the testimony a story of managers and lieutenants and employees who did everything that was ever asked of them, who could achieve anything, who never ran out of energy and overcame every obstacle. That’s a powerful company. It made me realize that anybody who invested in Chrysler for any reason other than the strength of its people was missing the point.

What is your top pet peeve with PR people?
I have a lot of respect for the PR people of this business. Some of them have to be versed in a dozen different disciplines to represent the messages they do. But since you asked for a peeve – I’d have to say it’s those pitches that aren’t thought through. I’m willing to hear you out on almost anything, but I’d really appreciate it if at the end there is some relevant point to look into – beyond “it’s my client and they’re good people.” No doubt.

Tell us a little about yourself (family, interests, favorites, background, etc.)
I grew up in Nashville, living the life of a Southern boy with hunting dogs and country cooking and Porter Wagoner on the hardware store radio. But before I developed a Southern accent, I moved to Boston, where they really talked funny, with their scrod and their candlepins and their Yastrzemskis. But I never developed a Boston accent either. So I’ve always had a hard time convincing people I’m from wherever I claim to be from.

My wife and I have two daughters. The youngest is having a wonderful time seeking her career fortunes in Manhattan, and I spend a lot of time trying not to pine for her. Her sister is married and has a baby and they live close by in Nashville. And I mean very close. They’re building a new house, but their old one sold too fast, so the three of them, with their boxer, are living with us temporarily until the new place is finished.

Finish this sentence: “People would be surprised to know that I…really don’t like country music.” Sorry. Every time the conversation in Nashville turns to Jason Aldean or Brad Paisley or Little Big Town, I sort of turn my head toward the window and think of England.