Fact: Reporters’ First Research Source is NOT the Info You Sent Them 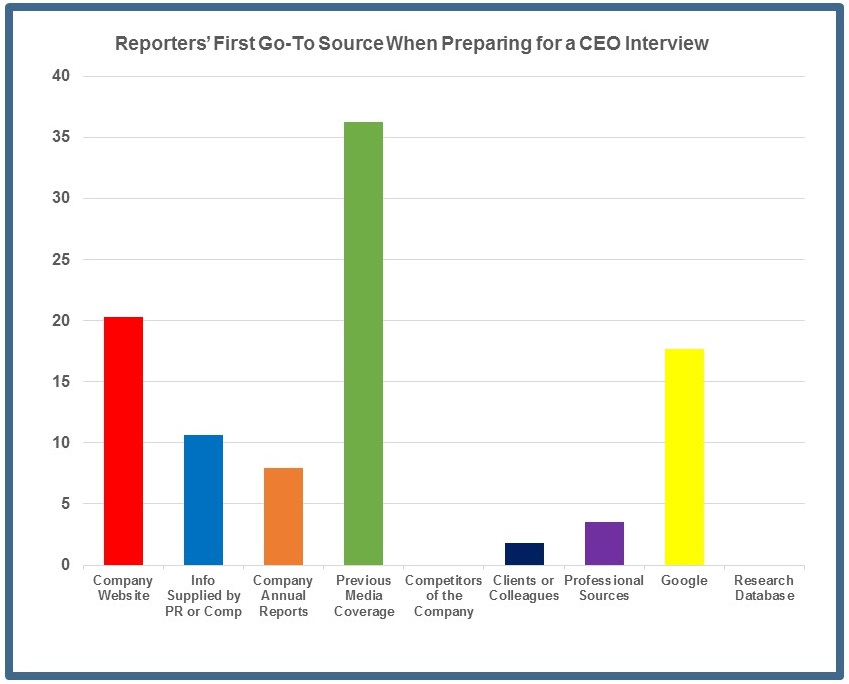 Only one in 10 journalists surveyed by the Public Relations Global Network (PRGN) ranked the info sent by the company or its PR firm as the first source they use when conducting research before a CEO media interview. That means 90 percent of journalists are going somewhere else for their first research stop, and these other sources may help shape the story’s tone and content before the materials you provide can have an effect.

Previous coverage by other media was the top choice for journalists surveyed, with 36.3 percent; followed by the company website with 20.4 percent; and Google with 17.7 percent.

So, does that mean you shouldn’t bother with providing journalists solid background info before they interview your CEO?

You definitely should provide info, as it is still among the top several most-often-turned-to sources for research … usually just after previous media coverage and the company website.

To help prepare for the best possible CEO media interview outcome, you should:

Among the 21 percent of reporters that said they use social media as a research source for CEO interviews:

So put these channels on your radar (if they’re not already) and monitor what your company’s and CEO’s channels are communicating to the world.

One last point: More than 56 percent of journalists surveyed said they interviewed 10 or fewer CEOs per year; with 29.2 percent saying they interviewed five or less CEOs a year. This suggests a few things:

The PRGN journalist study surveyed more than 110 journalists from around the world to get insight on how media professionals prepare for and conduct interviews with CEOs, as well as to understand how their reporting duties and needs are changing. Click here for more info.