Please provide your job title and media outlet(s), as well as a brief description of your duties:

I’m a senior content director at WardsAuto. We are a world-leading provider of automotive insights and analysis that has been supplying the auto industry with information and data for more than 90 years. We are based in Southfield, MI, and we are part of Informa, a global business intelligence company with more than €2.7 billion ($3.1 billion) in revenue that operates in 30 countries.

WardsAuto posts new articles, columns and data every day to WardsAuto.com, publishes e-newsletters on a variety of hot automotive topics, and builds interactive forums such as the WardsAuto Interiors Conference and WardsAuto User Experience Conference.

I write stories and special reports for WardsAuto.com, but a big chunk of my time now is devoted to creating content for our growing number of conferences. We’ve held six conferences this year and have three more before the end of the year. I’m also a judge for the North American Car, Utility and Truck of the Year and the Wards 10 Best Engines, Interiors and User Experience competitions.

The Wards User Experience Conference is coming up Oct. 2, so I’m writing and editing a lot stories related to that. When I recruit speakers I now encourage them to write a brief commentary about something related to the conference topics, so I’m editing some of those pieces now. The term UX has been around a long time in consumer electronics but it has become the hottest term in the auto industry as connectivity and advanced driver-assist systems have become so important to consumers.

I got caught up in a national controversy with Rush Limbaugh and the California Air Resources Board that was crazy to the bone.

In 2009 the California Air Resources Board proposed a new regulation that would require automakers to use heat-reflecting paints on future products. Heat-reflecting paints were found to keep buildings cooler and save energy, so CARB regulators drafted a proposal for automotive paints they believed would lower vehicle cabin temperatures, reduce the load on air conditioners and ultimately save gas and reduce emissions.

The problem was CARB did zero research and had no clue painting cars with jewel-like finishes on high-speed assembly lines is vastly different from painting a building. They just did not do their homework.

A top executive at PPG Industries, the world’s largest automotive paint supplier, told me on-the-record that dark pigments and paints that could meet the standard had not even been invented yet. And she told me that if the proposed legislation was passed, vehicles with black finishes would not meet the standard and automakers wouldn’t be allowed to sell them in California.

So, I wrote a commentary that said California’s ill-conceived legislation would be a new twist on Henry Ford’s old saying. It would be: “You can have any color you want as long as it isn’t black.”

The story went viral and got out of control. I got calls from major TV and radio stations from all over the country wanting to interview me about crazy California banning black cars. Then Rush Limbaugh talked about my story for two days, ranting that “Tyrants want to ban black cars.” Then the story really blew up.

CARB held a press conference where officials indignantly denied reports they were trying to ban black cars and blamed a nutty unnamed blogger for starting all the rumors “based on a kernel of truth.” An avalanche of coverage parroting CARB’s defense followed: crazy blogger, “kernel of truth,” etc., usually accompanied by screenshots of my commentary. No one mentioned the kernel of truth was that CARB’s lazy legislation did indeed amount to a de facto ban on black.

A few weeks later CARB announced it had decided to shelve its proposed “cool paints” initiative. I wore my tinfoil hat with pride that day.

I wrote a column in the dark days of the auto industry that explained how keeping General Motors and Chrysler workers gainfully employed with the automotive rescue would quickly pay for itself with the payroll taxes from 1.2 million people being employed rather than jobless and by avoiding the devastating social costs that massive unemployment would bring. I received many touching notes from readers who expressed their gratitude for helping them explain to skeptics why their jobs were important and why the bailouts were the best option for the country. I can see the headquarters of GM and what now is FCA from my office in Southfield. Just about everyone in my neighborhood in suburban Detroit somehow is involved with the auto industry. I found it shocking so many people even in Michigan did not understand the importance of saving the two.

I like writing about technology, design and new trends. And I like finding stories in these areas that other reporters don’t see.

I was an exchange student in Mexico for a year and one of my classmates there was very concerned about two teenage girls from her home town in South Dakota that were in a Mexican prison for allegedly smuggling drugs. We got on a bus and visited the girls in prison over a weekend. We co-wrote a story that ended up on the front page of the biggest paper in South Dakota. The girls were relatively safe, given the circumstances, but it was a painful story to write. That experience made me decide to be a business writer.

My first paid assignment was a short essay for Life magazine on what it was like to be a college senior for a special issue on youth they were doing.

My father was a manufacturing engineer who made the automotive industry sound like it was the most exciting place anybody could be, so I worked for a few years at publications like Production Magazine and then joined Wards in 1984. I’ve been at Wards ever since, but the company and my responsibilities have changed so much over the years I feel like I’ve had five or six different jobs at five or six different companies.

Finish this sentence: If I am not reporting…

I’m working on a conference, in the gym, or riding my Triumph Bonneville motorcycle.

Look at WardsAuto.com before you pitch and don’t start your pitch letter with “Hi there, journalist name here.”

Any pet peeves with PR people?

We always get a lot of requests to do executive interviews at automotive events when we are busiest. I would much prefer to do a phone interview a week before, under embargo, when I’m not so pressed for time.

It may not look like it, but I’m a gym rat that has spent six to eight hours a week training with weights for most of my adult life. My wife is a retired registered nurse who now is a serious gardener. Pictures from her garden get 10 times more likes on my Facebook page than my car stuff. She also plays pickleball five days a week. Our son is a PhD candidate at Rice University in Houston, TX. Rice found his research on the interrelationships of human behavior, food and climate change so compelling it is giving him free tuition for five years and covering his living expenses. If you are a parent, that’s better than winning the lottery. 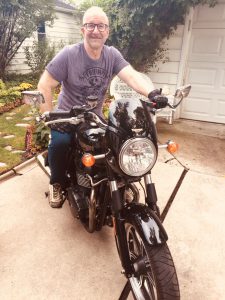 You can check out some of Drew’s latest work here: