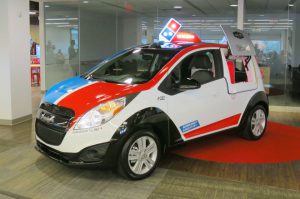 When Domino’s wanted an automotive PR expert to help launch the pizza industry’s first purpose-built delivery vehicle, they came to the Bianchi PR team. Together with our PRGN partner Stevens Strategic Communications, the team delivered a proposal that the client said “blew the doors off” the proposals submitted by other Detroit firms.

The event included a Michigan-themed pizza lunch, the press conference, a tour of Domino’s R&D kitchen and an opportunity for reporters to make their own pizza in Domino’s onsite pizza school. Many of the 95+ APA members attending called it “the best APA event ever.”

Over the next few months, the momentum continued as our other PRGN partner agencies in key markets (Lewis Public Relations, The Castle Group, The Fearey Group and VPE PR) extended the reach with subsequent local DXP roll-out events for Domino’s franchisees across the U.S.

Russell Weiner, president of Domino’s USA and “father” of the DXP said: “This coverage is absolutely incredible. Have been hearing from folks all over the country. Thanks so much for all the hard work you put into the event. It couldn’t have gone better.”

(Special thanks to Jenny Fouracre Petko, Dani Bulger and Tim McIntyre of Domino’s Pizza’s Communications team for choosing our PRGN team for this effort.)