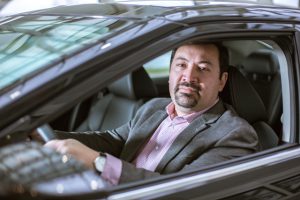 Without revealing any secrets, can you tell us what types of stories, trends or issues are on your radar now?
I’m consumed by everything related to the rapid rise of autonomous cars, and in particular, the potential for connected, self-driving vehicles to fundamentally change humanity as we know it. I don’t view that as an exaggeration: We’re hurtling toward a paradigm shift in human movement, a fundamental change the likes of which hasn’t been seen since Henry Ford, and we don’t really have a collective clue about what it all means yet.

I’m actually somewhat less interested in the technology itself and more in the ramifications that will result from its implementation. There will undoubtedly be major societal consequences from autonomy — both positive and negative — and everyone from the business community to governments and universities are struggling to make sense of it.

As a journalist and someone who majored in social relations and anthropology in college, I find it all endlessly fascinating and promising. However, as an enthusiast, I also fear that over the long term, self-driving cars will make life very difficult (if not impossible) for those who prefer to take the wheel themselves.

Tell us about your dream assignment.
I honestly don’t know that I have one. I got into this business because I love cars, writing and travel in equal measure, and my entire career has been beyond what anyone could reasonably hope for. I’ve been spoiled by my ability to make a living doing this for over a decade now, and I’ve been privileged to help find and mentor others along the way. It may sound trite, but my professional life as a whole has been a dream assignment.

Describe the craziest or most fun story you’ve written.
Most of my favorite stories tend to center around amazing drive experiences that I’ve been fortunate enough to be a part of. Running Mercedes’ SLS AMG at high speeds on the trail of the legendary La Carrera Panamericana road race from Puebla to Oaxaca stands out as particularly memorable, as does lumbering to the Arctic Circle in cargo vans.

More recently, I enjoyed researching and writing the curious story of a Houston-area Hyundai dealer that became the accidental king of Chevrolet SSR sales. Specializing in the oddball retro convertible pickup fundamentally transformed owner Paul Peebles’ used car business, to the point that North Freeway Hyundai now has a dedicated exotic and collectible car showroom. I wrote the piece for Automotive News, and the best part was talking to Paul Peebles, the dealer’s folksy, charismatic owner.

What is your top pet peeve with PR people?
In a past life, I was a tour publicist for a record company and its roster of artists, so I sympathize with those charged with trying to gain the attention of journalists. It’s a very difficult job.

Having said that, I feel the best practitioners of the craft recognize when they are tasked with promoting something of obviously limited importance or utility. I don’t think giving someone the hard sell on covering a new cupholder design is worth it when you need to have an ongoing relationship with that person.

Tell us a little about yourself (family, interests, favorites, background, etc.)
I was born to immigrant classical musicians from the Czech Republic and Japan, so music has always featured heavily in my life.

Being a native Clevelander, I habitually root for the underdog in everything from sports to the auto industry, but I’m also a realist.

I’m drawn to mid-century modern and contemporary design — particularly architecture and furniture. I’m also a fan of Frank Lloyd Wright. My girlfriend, son and I live in a home penned by a car designer who was heavily influenced by Wright’s Prairie School period.

Despite being fascinated by the future of the automobile and working for a tech publication, my personal car fleet tends to gravitate toward the simple, elemental and eccentric. Among other things, in my garage you’ll find a surprisingly coherent Volvo 240 pickup truck conversion, a Japanese-market Nissan Pao retrocar, a Mazda MX-5 Miata and an Acura TSX Sport Wagon.

Finish this sentence: “People would be surprised to know that I ________”
… also wanted to be an automotive spy photographer when I was young. In this age of omnipresent cameraphone pics and internet leaks, it’s hard to imagine, but when I was a kid, I imagined it would be hugely exciting to be the next Hans Lehmann or Jim Dunne, camped out in Death Valley or the Arctic Circle, hoping to bring the world their first glimpse of as-yet-unseen future cars.