Reporters NEVER allow CEOs to review their quotes before a story runs, right? 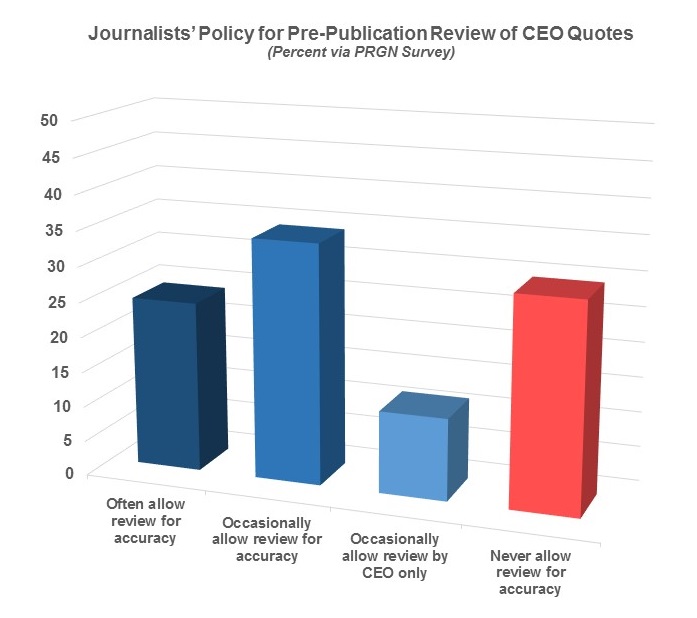 Contrary to popular belief among PR professionals, many of today’s journalists will actually allow CEOs or their PR representative to review their quotes for stories prior to publication.

According to a survey of more than 110 journalists around the world conducted by the Public Relations Global Network (PRGN), 70 percent of reporters will allow a review of quote prior to publication in some cases:

Moreover, based on results from an earlier study conducted by PRGN in Europe and North America, it appears that pre-publication quote reviews (as well as full story reviews) are typically much more common in Europe than in North America.

How do you obtain this kind of insight?

One way is to work with a local PR expert who has a deep understanding of the local media, market and cultural nuances, such as those senior PR professionals we have available through our global network, PRGN – which has offices in 50+ key markets around the globe that are run by such embedded local PR experts.

Gain more insight into how you can enhance CEO media interview outcomes and avoid faux pas by tapping this kind of local PR expertise here.

The PRGN journalist study surveyed more than 110 journalists from around the world to get insight on how media professionals prepare for and conduct interviews with CEOs, as well as to understand how their reporting duties and needs are changing. Click HERE for more info.