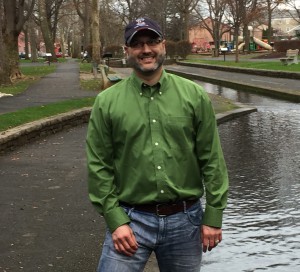 What’s the top story you’re working on right now?
The top story I am working on right now is the evolution of Fiat Chrysler Automobiles. FCA announced changes to its strategic plan in late January. Those changes included a decision to eventually stop producing the Dodge Dart and the Chrysler 200. Meanwhile, the company will place a greater emphasis on the product development, production and sales of its Jeep and Ram brands. So far, FCA has said very little about when production changes will occur, what will mean for workers at plants in Warren, Sterling Heights, Belvidere, Ill. and Toledo, Ohio. I don’t know if the company will announce all of the changes at once, or piecemeal. So, this isn’t exactly a story. It’s more of a topic, or an issue, that will unwind over the next year. My job is to monitor everything I can and, when possible, break stories that relate to this new strategic plan.

One recent story that was a consequence of FCA’s decision to drop the Chrysler 200 is a nine-week layoff for workers at Sterling Heights Assembly. Those workers also have been having a hard time collecting unemployment. Here is a link to that that story: Long layoff looms at FCA’s Sterling Heights plant.

Tell us about your dream assignment.
I think I already did it. Last June I spent eight days traveling through Italy to learn more about Fiat. I was with a senior FCA spokesperson as well as Mike Wayland from the Detroit News for the entire trip. We spent time in Turin, Milan, Naples, Melfi, Maranello and Bologna. We toured two different automotive historical museums, Fiat’s headquarters in Turin, a Maserati factory, a Jeep factory a Ferrari historical museum and Ferrari’s manufacturing campus. We also took historical tours of downtown Turin, Bologna and Naples. The trip culminated with the unveiling of the Alfa Romeo Giulia in Milan. It was a tremendous experience that taught me a lot not just about Fiat but also provided me with incredible insight into Italian culture and history. The food and wine were pretty good as well.

The trip led to about a half-dozen good stories that simply would not have been possible from Detroit and a daily blog, which is here: Final thoughts on Italy’s planes, trains and automobiles.

Describe the craziest or most fun story you’ve written.
Back in the 1990s, a company called the Longaberger Company consolidated its headquarters into a single building. They built a nine-story building in the shape of a basket because their main product is hand-woven baskets. Google “Longaberger basket building,” and you will be mesmerized.

At the time, the company’s annual sales had topped $1.2 billion and its political influence in the state of Ohio was growing. I worked on a project with a coworker for more than two months to dig deeply into the company in an attempt to figure out why the company’s products were so insanely popular and if the company could keep growing. Some basket collectors own 150 or more of the baskets produced by the company. We produced a three day series that included about 15 different stories about the company. The baskets are sold in “home shows” through a direct sales model. My colleague – a former sports reporter – and I respected the company but just could not grasp the appeal of its products. A few weeks ago, the company announced it would be leaving its huge basket headquarters. The company has since been acquired by another company and its sales have declined for the past 10 years.

What is your top pet peeve with PR people?
When PR people ask you to email them your questions and then, after that, send you a terse, wonky statement that dodges the question and raises more questions. Then, when you ask for clarification, the PR person refuses to say anything more or to answer the phone and have an actual conversation about the situation.

Here’s the deal: I completely understand that some stories are very sensitive and all I am going to get is a one to three sentence response without elaboration. I also value the efficiency of email. I believe emails work really well when the reporter and the PR person know each other, trust each other, and have an understanding of the topics and issue. But I think it’s dangerous for PR people to rely solely on email to communicate with reporters who are not familiar with a company or a topic.

The emailed statement should supplement actual discussions. You might want to know, for example, that I have six company employees and union officials on the record criticizing your client and that the story is going to go page 1. And that might not be something I want to tell you in an email. But if you know that, it might cause you and your client to offer more than the short, terse statement you have provided.

You also might be able to explain, on background, something critical about how your company or client operates that helps me understand the situation and helps me more accurately explain it to our readers. This type of nuance can only be covered in a phone call and if you are hiding behind your computer screen you won’t have as much control over your client’s or employer’s message.

What is the top trend you’re covering or interested in right now?
Autonomous vehicle technology and self-driving cars is going to be a huge, emerging area in the coming years. That said, I don’t need more information on this topic. I am already getting barraged on a weekly if not daily basis with news, events, experts, reports, etc. in this area.

Tell us a little about yourself (family, interests, favorites, background, etc.)
I live in Detroit on the East Side. I enjoy running and hiking, good beer and a good burger. I am also a political junkie. I don’t actually have a degree in journalism. My degree is in political science.

Finish this sentence: People would be surprised to know that I…
People might be surprised to know that Rage Against the Machine is one of my favorite groups and that I often enjoy watching UFC and mixed martial arts fights. Yes, it’s brutal. Yes, it’s just two guys beating each other to a pulp. But hey, the sport also requires tremendous skill, strategy and a commitment to fitness that I find fascinating.