When one of the world’s leading consumer brands wanted on-the-ground media relations support in Detroit for its Bud Bowl Concert Series, they could have had any firm they wanted. They picked Bianchi PR.

For three nights, Anheuser-Busch brought life back to the six-years-shuttered Tiger Stadium, erected its own concert club on the infield and hosted concerts by rapper Snoop Dogg, rock band 3 Doors Down and local talent for thousands of people in town in conjunction with NFL Super Bowl XL being held at Detroit’s Ford Field.

Bianchi PR helped with general media logistics, dealt with a union protest outside the stadium, assisted in media relations and photo and video editing and distribution, helping A-B to generate nearly 400 news stories with an audience of more than 24 million – spanning media outlets from Associated Press to ESPN to US Weekly. 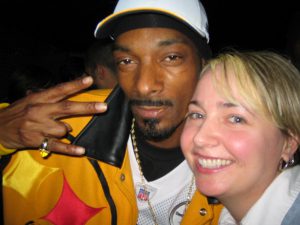 Bill Mueller, senior communications manager for Anheuser-Busch said: “I had the good fortune of working with Bianchi Public Relations during Super Bowl week in Detroit, promoting Bud Bowl ‘Club 1620’ at Tiger Stadium. Having ‘ground support’ on the streets of Detroit … experts who know the intricacies of local media, was essential for Anheuser-Busch … Bianchi Public Relations ran with the ball locally! Bud Bowl Detroit will go down as one of the most successful in a long line of Super Bowl promotions.”

(Special thanks to Bill Mueller, then with Anheuser-Busch, for selecting us, and to the unnamed person who first recommended Bianchi PR to Bill as the “best media relations firm in Detroit.”)