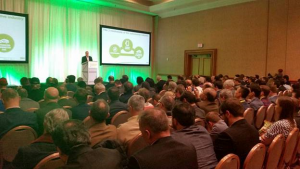 At CES (formerly known as the Consumer Electronics Show), the largest trade show of its kind in the world with some 177,000 attendees and 4,300 exhibitors spread out over several facilities and 2.5 million square feet of exhibit space, an exhibitor competes for media attention with everything from the latest big screen TVs to virtual reality devices, and from smart refrigerators to the latest home gadgets.

And if that competition is not stiff enough, how does an automotive supplier stand out at this show when faced with intense competition not only from the major automakers of the world – including BMW, Daimler, Fiat Chrysler, Ford, Hyundai, Nissan, Toyota and Volkswagen – in addition to well-known suppliers in the ADAS and auto-tech space such as Bosch, Continental, Delphi, Magna, Visteon and ZF?

Bianchi PR and its San Francisco-based partner, Landis Communications, Inc., were charged by Valeo to make “lightning strike” by generating solid media awareness and media attendance at the supplier’s CES news conference during media days. Through weeks of pre-pitching and onsite media relations, we helped turn out almost 200 media and top analysts to the French supplier’s press event, which featured the supplier’s Chairman and CTO.

Would we call it a success? Well, the media crowd we helped bring to Valeo’s event was larger than that of similar events hosted by two of Valeo’s top competitors on the same day.

BPR’s Top 25 PR Projects is a biweekly profile highlighting some of our more interesting client projects, as we commemorate Bianchi PR’s 25th year in business.