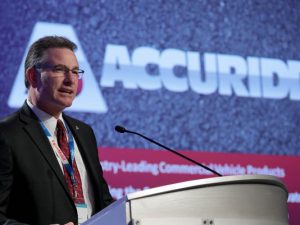 When Accuride Corporation, a leading supplier of components to the global commercial vehicle industry, wanted to have an impact at the 2016 Heavy Duty Aftermarket Week (HDAW) show in Las Vegas, they contacted Bianchi PR to help.

The Challenge: Accuride had several important announcements to make … and also several things to prove, at its press conference. Having announced turnaround plans at the same show a couple of years prior, the company wanted to share with its key audiences that it had not only succeeded in its plans but had exceeded them and were driving more growth with new products, technologies and acquisitions.

With HDAW being a popular trucking industry event – the largest North American gathering of independent heavy-duty aftermarket leaders – we knew we had to reach out and communicate one-on-one with our target media and craft our announcements perfectly to get the engagement Accuride sought.

Tactics: Working closely with Timothy Weir, Director of Public Affairs, Communications & Marketing for Accuride, the Bianchi team helped lay out a media outreach timeline that included targeted media pitching, press announcement writing for the company’s newly launched products and technologies, interviewing Accuride experts on key technologies, press conference logistics planning and media kit development. Our goal was to act as an extension of Accuride and to make things as seamless and accessible for the media as possible.

We also assisted with creating a key message document and media background briefing memo for Accuride’s executives and CEO, plus created social media posts to use live during the event.

Results: Accuride’s press conference was well attended and its news made a larger media impact than anticipated. Nearly every key media outlet targeted reported on the news (some outlets included Fleet Maintenance, Fleet Owner, Heavy Duty Trucking, Tire Business, Truck News, Transport Topics and more) and the coverage was overwhelmingly positive and on message. Several journalists requested follow up interviews and Accuride’s sales team noticed an immediate uptick in interest from customers on one of the newly announced technologies.

In a post-event email to the Bianchi team, Weir said, “The amount of media coverage of our news in the industry is humbling. Thanks for the tremendous job!”

(Special thanks to Timothy Weir at Accuride for reaching out to Bianchi PR to assist with this event.)