Helping a then little-known sealing joint venture between a German company and a Japanese company communicate the benefits of its lean manufacturing program, when almost no supplier in North America was actually practicing lean production.

Approach: Start with a media audit to gauge awareness and opportunities, then move into media relations — starting with a press briefing featuring The Machine That Changed the World author James Womack — then conducting ongoing media relations activities.

The embedding of BusinessWeek’s Detroit bureau chief on a kaizen team in a manufacturing plant in Indiana yielded a two-page story in BusinessWeek – which itself was read by an automaker CEO and helped start a close relationship with that automaker, 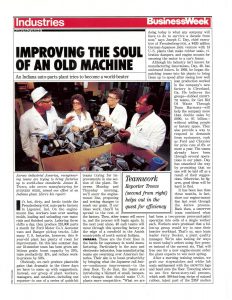 ultimately yielding a tripling of annual sales (worth tens of millions of dollars) to that customer.

(Special thanks to Sharon Wenzl, who headed FNGP’s communications, for selecting Bianchi PR to help launch this initiative in 1992.)