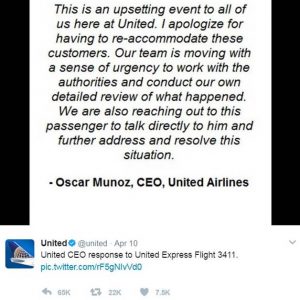 passenger from a United flight on April 9 was the start of a PR disaster for the airline.

In less than 48 hours, a video of the man being dragged off the plane has been viewed by hundreds of millions of people, many of whom were outraged at the apparent callous treatment of this passenger. And though the physical act of removing and harming the passenger was not committed by a United employee, United is taking the brunt of the blame in the court of public opinion. Partially because of the sheer shock value of the video, and partially because United’s initial comments on the video were late, clumsy and appeared unapologetic.

Whether or not this incident will cause long-term damage to United remains to be seen. It may take months to assess the actual cost generated by this single operational act and the initial company communication missteps that followed.

Right or wrong, on the surface, it appears to the average consumer that United put its own employees ahead of, and woefully mistreated, a customer. And the negative publicity that ensued, which was exacerbated by a baffling non-apologetic initial “apology” from the CEO and the reveal of a defensive internal communication that made United appear even more heartless, have cost the airline an incredible amount of goodwill and trust. Now, after a couple of days of massive negative publicity, United’s CEO has issued a sincere apology and a pledge to right the wrongs that led to this incident … and the company appears to be ready to try to reverse the damage.

It’ll be interesting to see how it plays out in the days ahead. But in the meantime, what can we learn for our own companies from this fiasco?

1. Sometimes, even when your employees are acting legally and following corporate policies, their actions may still be viewed by customers or the general public as “wrong.” Policies need to be reviewed and modified as these kinds of situations arise. Companies need to ask themselves the tough questions – or have the courage to hire independent PR counsel to play the devil’s advocate: How will the execution of this policy be viewed by the outside world? How might these policies violate our corporate principles or antagonize our customers? What are the possible repercussions?

2. Businesses should be aware that every action that occurs in your place of business or that your employees conduct can be captured on video and shared via social media. Your front line employees need to be aware of that fact and be trained to act appropriately. “Don’t do or say anything on the job that you don’t want to see, in the worst possible light, on YouTube tonight.” Ubiquitous cell phone video capability and the viral nature of social media have brought a whole new level of transparency to our world, and we need to make sure every employee understands that, and acts accordingly.

3. Any public apology your CEO makes should come quickly, and should acknowledge the offended parties and be truly apologetic in plain, direct and sincere language. Corporate double-speak has no place in an apology (seriously, “re-accommodate”?). Beyond that, the CEO should explain that the company is working to prevent the problem from ever arising again. Have the courage to say: “We screwed up. We let our customers down. We apologize for the way we treated you. There’s no excuse for what happened. And I personally pledge that we are going to put a new policy in place to prevent that from ever happening again.” And then follow through on that promise.

4. A company should assume that virtually any email or internal message that is sent to your employees will be shared outside of the company within 30 seconds, so internal and external messages must align. United’s initial internal note to employees quickly became public. Consumers perceived the language as defensive, tone deaf and callous – eliciting media headlines such as: “United CEO Praises Employees After Passenger Bloodied And Kicked Off Plane”. Make sure all of your messages – internal and external – are honest, consistent and compassionate.

5. The way a company communicates about a problem can either make the problem worse or it can build trust and win approval. People will not forgive a company that fails to respond, accept responsibility or apologize. But people will forgive a company that admits its mistake, a company that is honest, apologetic and demonstrably working to prevent future mistakes. Such a mea culpa can actually turn regular customers into intensely loyal brand enthusiasts.

6. With social media, there will be lots of people “reporting” on, and sharing video, photos or views of your incident, without all the facts … jumping to conclusions and offering speculation instead of objective info. And despite that – or perhaps because of it — the story will still spread like wildfire. So, the sooner you get your apology and the facts out via your own social and digital media platforms, as well as traditional media, the better.

Note: On the afternoon of April 11, United’s CEO offered a more sincere and appropriate – though untimely – apology statement …

The truly horrific event that occurred on this flight has elicited many responses from all of us: outrage, anger, disappointment. I share all of those sentiments, and one above all: my deepest apologies for what happened. Like you, I continue to be disturbed by what happened on this flight and I deeply apologize to the customer forcibly removed and to all the customers aboard. No one should ever be mistreated this way.

I want you to know that we take full responsibility and we will work to make it right.

It’s never too late to do the right thing. I have committed to our customers and our employees that we are going to fix what’s broken so this never happens again. This will include a thorough review of crew movement, our policies for incentivizing volunteers in these situations, how we handle oversold situations and an examination of how we partner with airport authorities and local low enforcement. We’ll communicate the results of our review by April 30th.

I promise you we will do better.