TROY, Mich., December 2, 2014 – While North America’s top automotive OEM suppliers are embracing the use of social media, most are making five critical mistakes, according to a proprietary study conducted by Bianchi Public Relations, Inc., a PR firm specializing in the automotive supplier and business-to-business sectors. 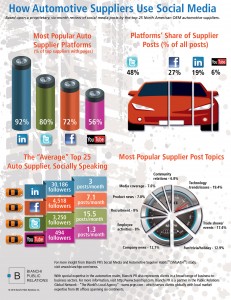 The study, “Social Media and Automotive Supplier Habits” (SMaASH)™, analyzed social media usage by the top 25 North American automotive OEM suppliers during the first six months of 2014 – with the four most popular platforms for this sector: Facebook, Twitter, LinkedIn and YouTube.

“Auto suppliers – like many other business-to-business sectors – are using social media, but most of them are way behind consumer-oriented sectors in terms of strategy, content and engagement,” said James A. Bianchi, firm president. “Every supplier I’ve talked with is intensely curious about how his or her company compares with peers and what they can do to boost engagement. To help provide some actionable insight, we conducted the SMaASH study.”

1. Posts do not include enough visuals. Although video and images boost audience engagement significantly, only 53 percent of supplier Facebook posts and less than 15 percent of Tweets, for example, included visuals.

2. Posts do not share enough earned media coverage. Although coverage in trusted media outlets is viewed as the most credible of all content, less than 10 percent of all supplier posts shared such coverage.

3. Too many supplier posts are self-promotional. While the rule of thumb is a company should post one update about the company for every three that are about the audience and its interests, suppliers are doing the opposite – with 50-75 percent of supplier social media posts being self-focused.

4. Suppliers are not using LinkedIn enough. Among the four platforms reviewed, LinkedIn typically gives suppliers their largest audience (average 30,000+), yet the top suppliers average only three LinkedIn updates per month. They Tweet more than twice as much, yet they have, on average, only 3,250 followers on Twitter.

5. Suppliers need to embrace more interactive posts. Interactive posts which allow the audience to express themselves and participate – such as contests, polls, surveys, trivia or opinion questions – tend to encourage the most audience engagement, yet less than 6 percent of supplier posts were of this category.

Other findings of Bianchi PR’s study of auto supplier social media use by the top 25 North American automotive suppliers included:

“Just being ‘on’ social media is not enough,” Bianchi said. “To boost engagement and build those close relationships so important in the OEM automotive community, suppliers need to think strategically about social media, how to integrate it into their overall communications and how to create the mechanism that will help them sustain it with the right content. The SMaASH study can help them move in that direction.”

With special expertise in automotive supplier PR and business-to-business PR, Bianchi PR was founded in 1992 and is ranked in the top five independent PR agencies based in Michigan, according to PRWeek’s 2014 ranking of public relations firms.

Bianchi PR is a member of the Public Relations Global Network – “The World’s Local Agency” –
one of the world’s largest international public relations networks. PRGN harnesses the resources of 49 independent public relations firms and more than 800 communications professionals to connect international companies and organizations with individual and culturally diverse markets globally. Visit PRGN online at www.prgn.com or on Twitter at @PRGN.