TROY, Mich., January 20, 2015 – North America’s top automotive OEM suppliers can significantly boost the engagement and effectiveness of their social media efforts by focusing on five key fixes, according to a proprietary study conducted by Bianchi Public Relations, Inc., a PR firm specializing in the automotive supplier and business-to-business sectors. 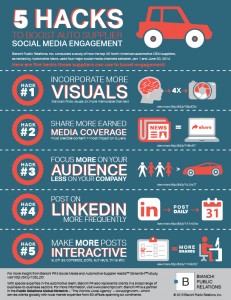 The study, “Social Media and Automotive Supplier Habits” (SMaASH)™, analyzed social media usage by the top 25 North American automotive OEM suppliers during the first six months of 2014 – with the four most popular platforms for this sector: Facebook, Twitter, LinkedIn and YouTube.

“Auto suppliers – like many other business-to-business sectors – overall are having some mixed results with social media. Some are doing it really well, others not so much,” said James A. Bianchi, firm president. “In analyzing six months’ worth of posts across four popular supplier channels for the top 25 North American auto suppliers, we found five areas that offer the greatest opportunities for improved engagement.”

1. Incorporate more visuals in company posts. Although video and images boost audience engagement significantly because the human brain remembers visuals betters and processes them faster than text, only 53 percent of supplier Facebook posts and less than 15 percent of Tweets, for example, included visuals.

Bianchi PR’s advice: Strive to have a visual in the form of a photo, chart, infographic or video for every social media post.

2. Share more of the company’s earned media coverage on social media. Although coverage in trusted media outlets is viewed as the most credible of all content, less than 10 percent of all supplier posts shared such coverage. Reporters are increasingly being evaluated on the viewership and engagement of their online stories, so sharing their stories helps the reporter and media outlet build their audience.

3. Focus more of the posts on the audience and less on the company. The rule of thumb is that a company should post one update about the company for every three that are about the audience and its interests. Suppliers are doing almost the opposite – with 50 to 75 percent of social media posts being self-focused. Bianchi said: “Social media is supposed to promote a conversation. If one side is doing all the talking, it’s not a conversation, it’s a lecture and it will drive followers away.”

Bianchi PR’s advice: Curate and create content that shares bigger picture industry data, trends and perspective on issues that will help your followers do a better job.

5. Make more of the company’s posts interactive posts. The SMaASH study showed that less than 6 percent of supplier posts were interactive. To boost engagement – and perhaps understand their customers and followers better – companies can increase the frequency of posts which allow the audience to express themselves and participate – such as contests, polls, surveys, trivia or opinion questions.

Bianchi PR’s advice: It’s not a conversation if you’re dominating the “dialogue” 94 percent of the time. Target at least three posts a week that seek your followers’ opinions, ideas and stories with surveys, contests, polls and trivia questions.

“The PR and communications people who typically oversee a supplier’s social media generally know what to do, it’s just that they may not have the time or resources needed so they end up being more reactive than proactive,” Bianchi said. “By starting the new year with a more strategic approach, in which they enlist help, set up a mechanism to curate content, map out their content schedule and develop some of the key messaging, they can move from reactive to proactive and better utilize the social media channels to build the desired relationships.”

Other findings of Bianchi PR’s study of auto supplier social media use by the top 25 North American automotive suppliers included:

“Having a presence on social media is not enough,” Bianchi said. “To boost engagement and build those close relationships that are so important in the OEM automotive community, suppliers should think strategically about social media, how to integrate it into their overall communications effort and how to create the mechanism and process that will help them sustain it with the appropriate content. The SMaASH study can help them move in that direction.”

For an infographic that shares SMaASH study tips or for more information on the study itself, visit www.bianchipr.com or email bianchipr@bianchipr.com.

With special expertise in automotive supplier PR and business-to-business PR, Bianchi PR was founded in 1992 and is ranked in the top five independent PR agencies based in Michigan, according to PRWeek’s 2014 ranking of public relations firms.
Among Bianchi PR’s ongoing automotive and business-to-business PR clients are BASF, Cooper Standard, Freudenberg-NOK Sealing Technologies, FRIMO North America, Johnson Controls, Schaeffler Group, TRW Automotive and 3M. The firm has also worked with organizations such as the SAE International, Automotive Industry Action Group, the Center for Automotive Research and the Steel Market Development Institute. For more information, visit http://www.bianchipr.com or call 248-269-1122.

Bianchi PR is a member of the Public Relations Global Network – “The World’s Local Agency” – one of the world’s largest international public relations networks. PRGN harnesses the resources of 49 independent public relations firms and more than 800 communications professionals to connect international companies and organizations with individual and culturally diverse markets globally. Visit PRGN online at www.prgn.com or on Twitter at @PRGN.