The infographic, which can be downloaded at http://bit.ly/22c4QHL, highlights key findings of Bianchi PR’s “Social Media and Automotive Supplier Habits 2.0™” 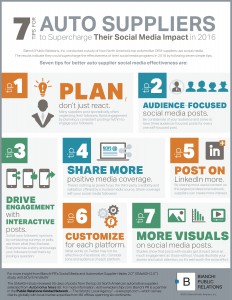 The SMaASH 2.0 study showed that suppliers made significant progress in using social media in 2015, yet still have room for improvement. The second proprietary study also showed that on average, the typical top 25 North American OEM auto supplier:

• Increased its social media following by 363 percent in the past year, to some 178,000 followers across the four most popular platforms (LinkedIn, Facebook, Twitter and YouTube);
• Posted some 58.6 updates per month, more than double the 2014 average of 26.9 posts, across its top four platforms; and
• Doubled the number of videos it shared on Facebook, Twitter and LinkedIn in 2015 over the previous year.

For more information about the SMaASH 2.0 study, visit the Bianchi PR blog at http://bit.ly/1R8a0hY.

Bianchi PR is a member of the Public Relations Global Network (PRGN), one of the world’s largest international public relations networks. Clients across six continents depend on the combined resources of PRGN to deliver targeted public relations campaigns in markets around the world. With revenues of more than $110 million, PRGN harnesses the resources of nearly 50 independent public relations firms and more than 900 communications professionals to connect international companies and organizations with individual and culturally diverse markets globally. Visit PRGN online at www.prgn.com or on twitter at @PRGN.
# # #